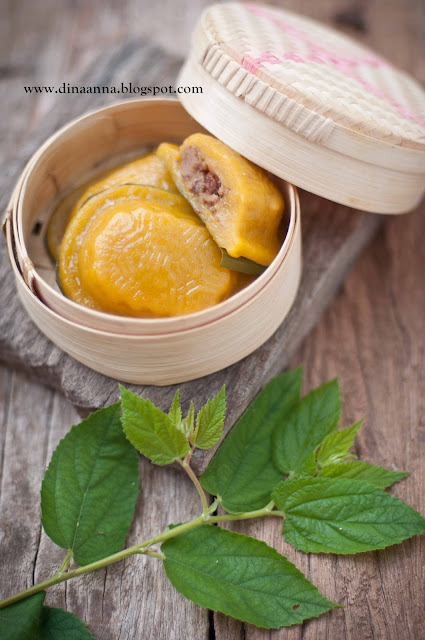 Finally, I made kue ku (or ku kuih), a traditional kue in tortoise shell shape that made of glutinous rice flour and sweet mung bean paste filling. I already have the plastic kue ku mold for so long but never have time to use it because I do not have the food red colouring. After succesfully colouring the klepon labu kuning yellow with the pumpkin, thought in my mind to make yellow kue ku as well ...^^


Lucky me, I found the recipe, kabocha kue ku, in Wied Harry's book. For the filling, I used his that substitute sugar with raisins/sultanas. For the dough, I just combined mashed pumpkin with glutinous rice flour and sugar (his used rice and tapioca flour).  It was just like the ordinary kue ku, sticky and sweet, with a hint of raisins.

It was a bit tricky to unmold this kue although that I already dust the mold with flour. I had to knocked it hard again and again to my palm and pinch the dough around the mold. Then, I read the other recipes. Some used coconut milk and some added oil to the dough. I wondered, will they help? 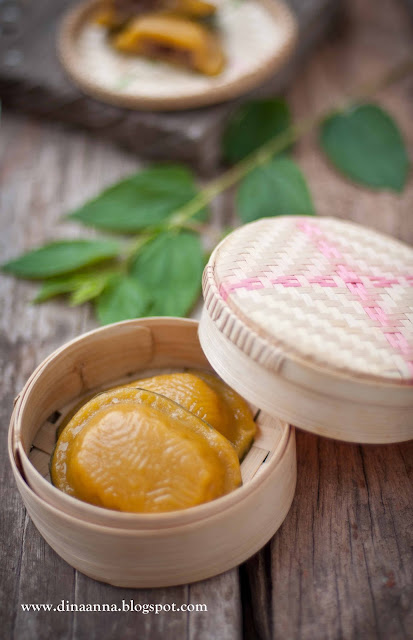 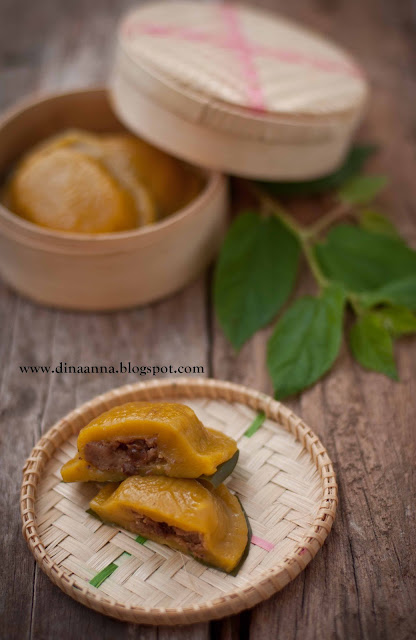 Methods:
For fillings:
In the food processor or blender, put all the filling ingredients except pandan leaf. Process until fine.
Transfer to a pan. Cook on low heat with the pandan leaf. Stir constantly until it thickens and cook through.
Remove and discard the pandan leaf.

For the dough:
Combine mashed pumpkin, flour, sugar, and salt. Mix well until it forms a soft and pliable dough. Add more flour if it is too wet.

Finishing:
Divide the dough into 45 gr each. Roll the dough. Flatten it. Place the filling inside. Roll it again into a round ball.
Dust the kue ku mold with flour. Cut the banana leaves 10 X 8 cm. Grease them lightly with oil.
Place the ball in the mold. Press it gently and evenly.
To release the kue ku from the mold, turned the mold upside down and knocked the mold to your palm. Place the kue ku on banana leaves.
Steam for about 10 - 15 minutes. You need to open the lid of the steamer every 5 minutes so that the shape of the kue ku will not spread.
Brush oil on the surface of the kue ku while it is still hot. 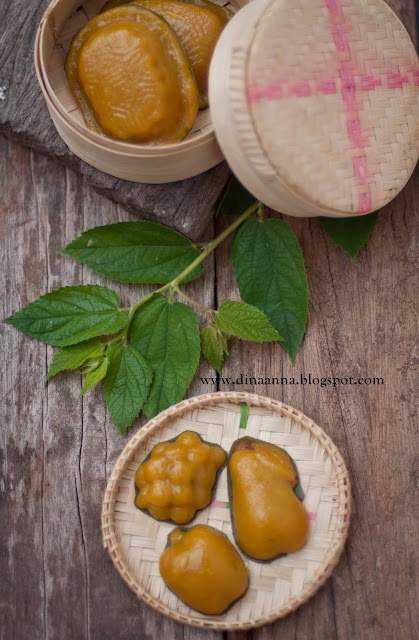