Another interesting noodle to try is mie titi. It is a popular and favorit noodle in Makassar, South Sulawesi. Actually mie titi is similar to ifumi, the dried noodle that is boiled then fried until crunchy and served with meat, seafood and vegetable thick sauce. Only that mie titi uses a special noodle that is thinner and yellower. Mba Hesti said that the special noodle is only available in Makassar, then I think we can substitute for the regular dried noodle to try this at home.

Mie titi is actually the name of a noodle restaurant not the dish itself. Travel kompas said that we can find the very same mie in other restaurants around Makassar, like mie Henky or mie Awa. And they are all good in taste and demand. Wikipedia said that the story of mie titi start when,

The best part of this dish for my children is of course the crunchy noodle (it remind me of anak mas when I was a kid... he he ).  Unfortunately, the sauce made it soggy after some times. So, it's better to eat it immediately when the sauce is still hot and the noodle is still crunchy. Yum... 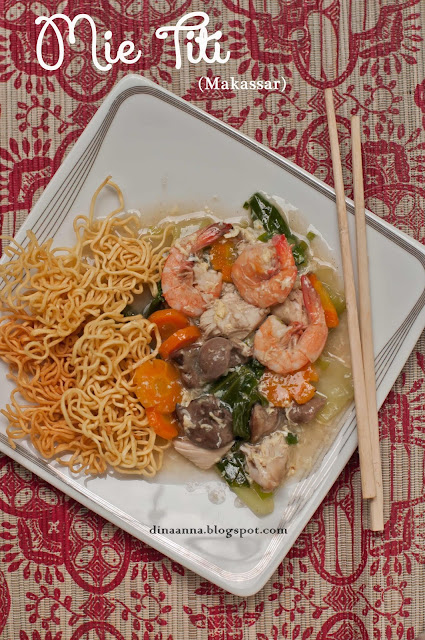 Mie Titi
adapted from  mba Hesti and other sources 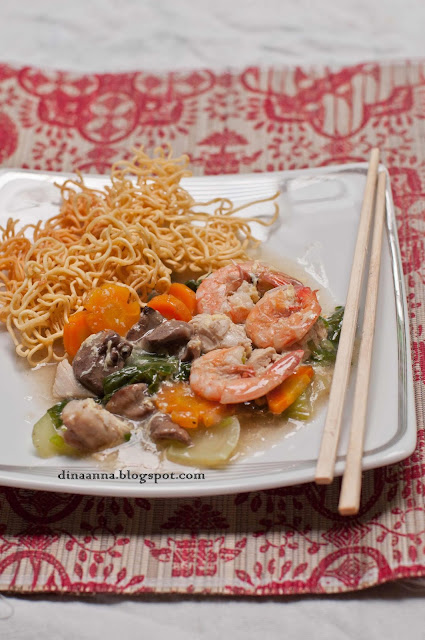 Marinate chicken, chicken liver and gizzard, and prawn with lime juice and salt in different bowls. Set aside.
Boil noodle until al dente. Drain well.
Heat oil on a pan. Divide noodle into some portions, as you like. Fry  it by portions until dry and crunchy. Drain well and let to cool on a paper towel, then keep in airtight container.
Heat again oil in the same pan. Fry chicken liver and gizzard until done. Set aside.
Heat oil on a wok. Stir fry onion, garlic and ginger until fragrant.
Add in chicken. Stir fry until it change color.
Add in chicken liver and gizzard and carrot.
Pour in chicken broth or water. Bring to boil.
Add in prawn and bok choy.
Dissolve well corn flour in 2 tbs water. Add it in the wok, stir well to thicken.
Pour the egg in steady stream. Keep stirring until the egg stringy.
Add the spring onions.
Adjust the taste with salt,  pepper and sesame oil.
Remove from the heat.
Serve hot with the crunchy noodle, a dash of lime juice and chilli sauce.

This mie titi is my entry for idfb chalenge 11, mie nusantara