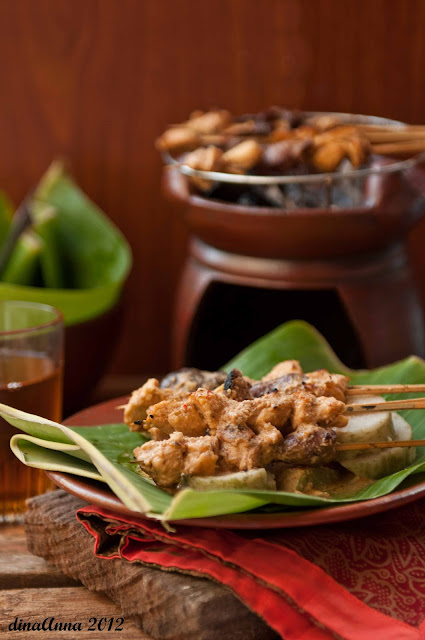 For these 2 months my husband got a job in Rembang. So he travelled there a lot. When I told him that the idfb challenge 5 is about sate, he suggested me to make this sate sarepeh, a traditional sate from Rembang.  Actually I have planned to join his trip to try this sate myself. But unfortunately until almost the end of this challenge I couldn't make it... :(
Then I googled to find the recipe. I found it in sajian sedap and nguprek di dapur. As I learned from both sites, I am really glad that it is such a simple sate to make, with not too many ingredients needed. I only have to adjust the amount of chillies to match my children taste buts. So, this sate sarepeh is my entry for the idfb challenge 5. 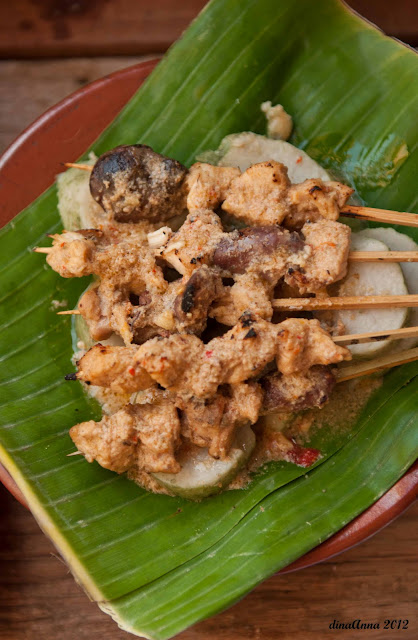 
to be ground together:
4 red chillies or more, discard the seeds
8 garlic
salt 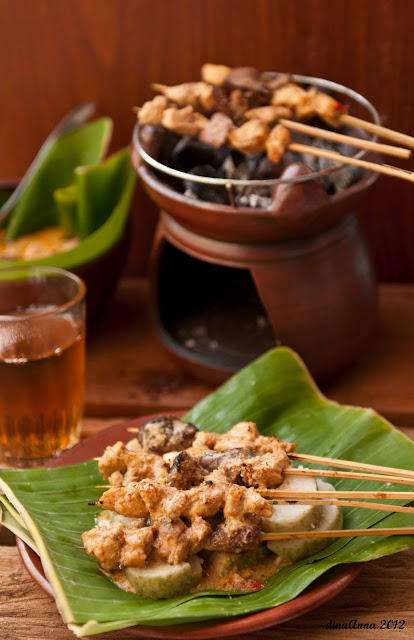 Methods:
Soak the bamboo skewers for a while to prevent from burning.
Rinse chicken and liver. Cut the chicken into small cubes and the liver into 2 pieces. Drizzle lime juice and sprinkle salt over them. Let sit for about 15 minutes.
Heat oil on medium high. Stir fry the ground spices and the leaves until fragrant. Add coconut milk and palm sugar. Reduce the heat. Cook until it thicken. Removes and set aside.
Thread 5 - 6 chicken and liver pieces onto the skewer. Pour 3/4 of the spices over them (reserve the 1/4 for serving). Marinate at least 1 hour.
Grill until well done.
Serve with lontong and the reserved spices. 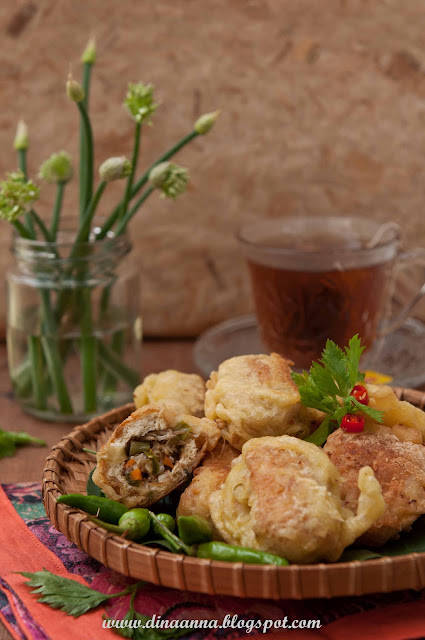 I just got a small besek (traditional box made of bamboo) of tahu (tofu) pong. I don't really  familiar with this tahu. I do eat tahu almost everyday, but not this kind of tahu. I usually buy the white and firm tahu.
Tahu pong gets its name from the word kopong which means empty in javanese because this tahu has such hollow inside. This will perfect for tahu isi or in other regions it is called tahu sumpel or tahu susur or tahu berontak (vegetables stuffed tofu). Some people add shredded chicken, egg or prawn for the filling but I prefer vegetables only. 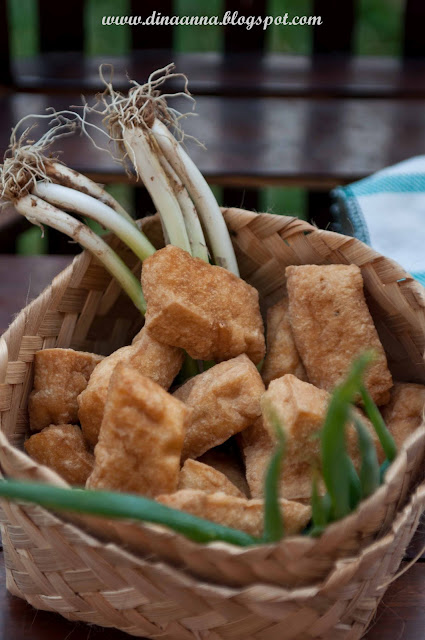 For the coating (batter):
Rice flour
All purpose flour
Water 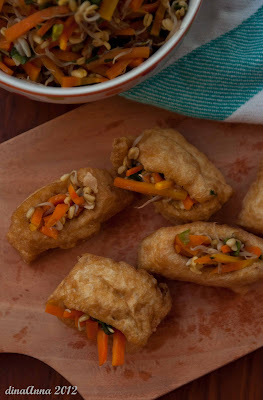 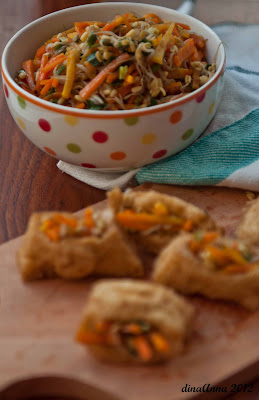 To make the filling:
Heat about 2 tbs oil on a wok. Fry garlic and shallot until fragrant.
Add the carrot, stir fry until a bit soften, add cabbage, bean sprout, and spring onions.
Stir fry until all cook but still crunchy. Season with salt and pepper.
Remove from the heat. Set aside 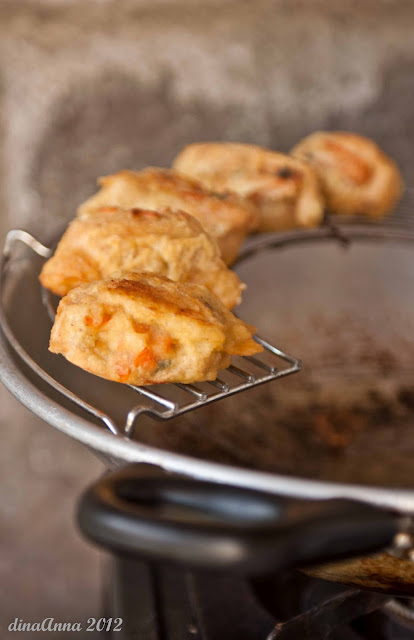 Using a knife make a slit on one side of the tahu.
Firmly stuff the vegetables inside the tahu through the slit.
Do the same with the rest of them. Set aside.

To make the batter:
Ground together the spices.
On a bowl sift together rice flour and all purpose flour.
Add the spices. Make a well in the centre.
Pour in enough water to make consistency that not too thick and not too thin.
Stir to mix all the ingredients until well incorporated and smooth. 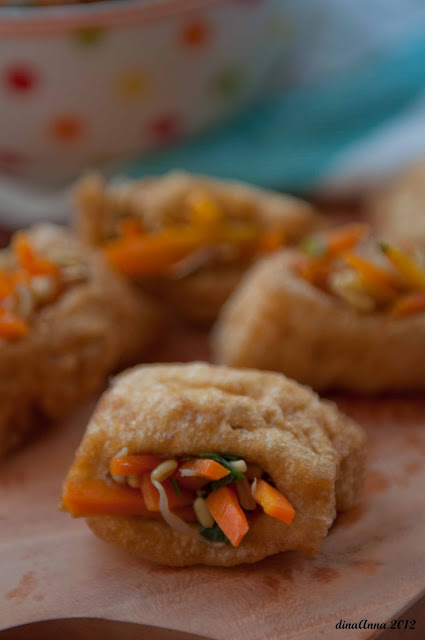 Heat enough oil for deep frying on medium heat.
Take one stuffed tahu. Dip it into the batter.
Put it in the hot oil. Fry the tahu until golden brown.
Serve immediately while hot with chillies and a cup of tea.
Enjoy! 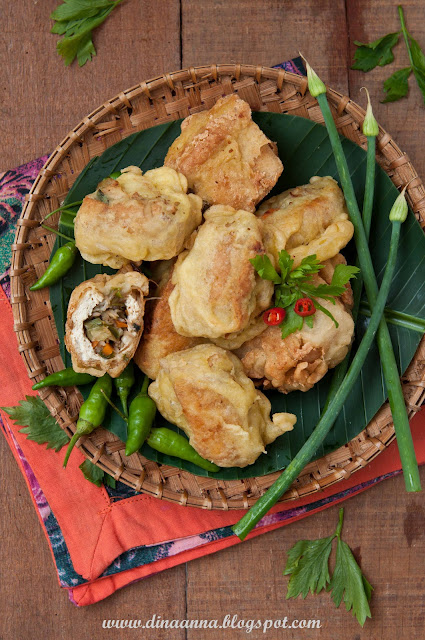 Email ThisBlogThis!Share to TwitterShare to FacebookShare to Pinterest
Label: side dish, tofu

I was feeling like fat-free baking last week. I googled for a cake recipe without butter, margarine or oil. Is there any? Yes it is, I found it in my kitchen notes, thanks ya mba yu....^^ Moreover, this cake is wheat free, egg free, and fat free. Can you believe that? 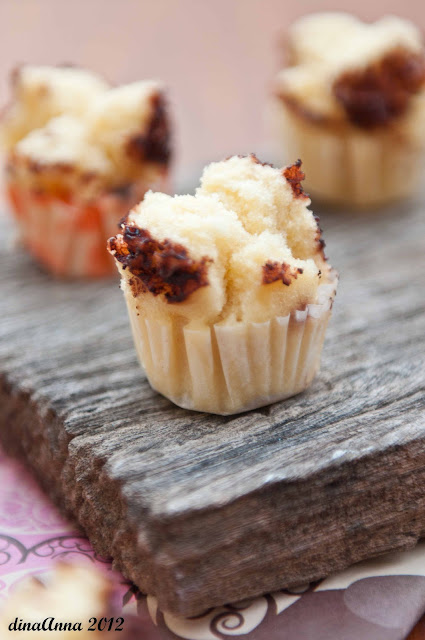 The original recipe:
by Farah Quinn via my kitchen notes

My variation:
As usual, the first thing I did is adjust the sweetness to my unsweet tooth. I reduced the amount of sugar to 150 gr. Then, I wanted to colour this cake naturally, that is why I blended 100 gr steamed pumpkin in the water required in this recipe, to add a hint of yellow, and also sprinkled choco rice to add brown spots on the cake. Last, because I run out of baking powder and based on my experience before that baking soda and lime juice can help egg-free cake to rise highly, I substituted 1/2 tsp of baking powder for 1/2 tsp of baking soda and added 1 tsp of lime juice. 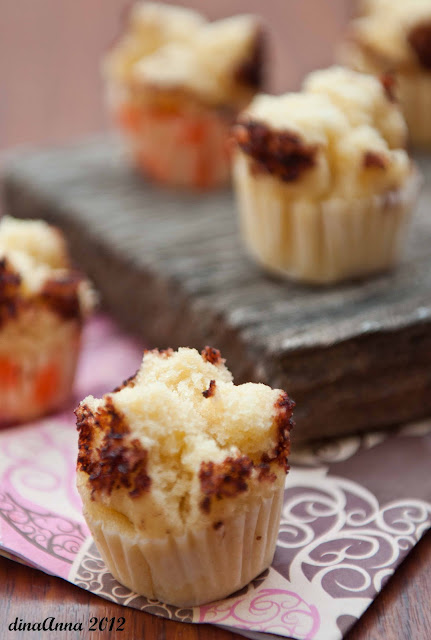 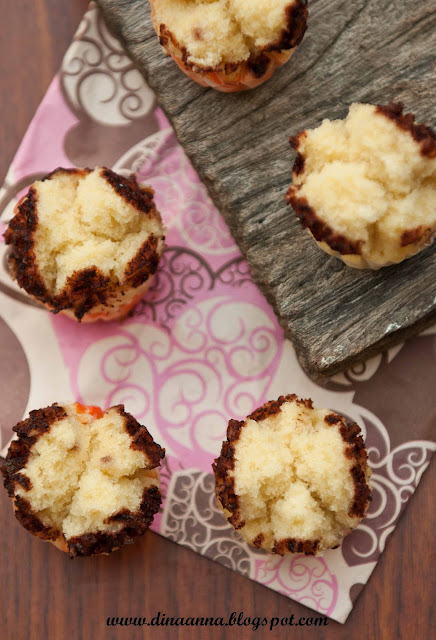 My Notes
This bolu kukus is really a simple and easy cake to make. I used my mini bolu kukus mould, so the cakes were done long before the steaming time stated in the recipe (15 minutes). They could rise highly enough, nice and light . But the colour was not as yellow as I expected. Maybe I need more pumpkin next time (?). Because this is rice flour steamed cake, so the taste is very close to kue mangkok. The taste of pumpkin is almost undetectable.
Diposkan oleh Unknown di 01:13 No comments:

Actually pumpkin cookie is very famous out there. One of my friends once said that it is a fall favourite cookie. But it is not in Indonesia. I never heard about it. That's why I just want to give it a try when I saw the recipe in femina website. Again, just as the story before, I had to omit the spices and substituted them for vanilla and flaxseed meal. I know people will say that it will be pretty plain without spices but my children love it that way. This cookie is soft, more like a cake than a cookie actually. But it is nice and my children like it. 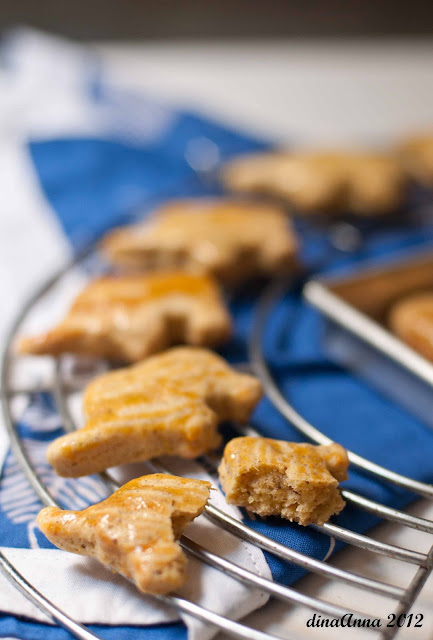 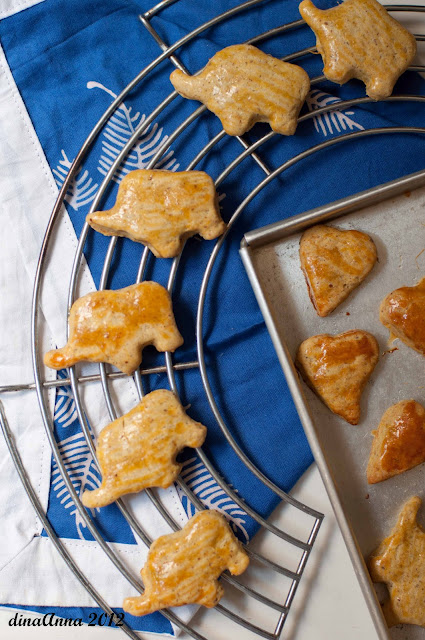 Methods
Preheat the oven 130C. Grease the baking sheets.
In a big bowl combine butter and dry ingredients. Mix using a pastry knife or fork until resembles breadcrumbs.
Add mashed pumpkin and ginger. Mix well. Add the egg yolk. Mix until the dough comes together.
Transfer the dough between 2 sheets of plastic. Roll it out.
Cut it using a cookie cutter you like. Transfer the cookies on the baking sheet. Brush with egg yolk.
Bake until golden brown.
Remove from the oven, transfer to a wire rack to cool completely. Store in airtight container. 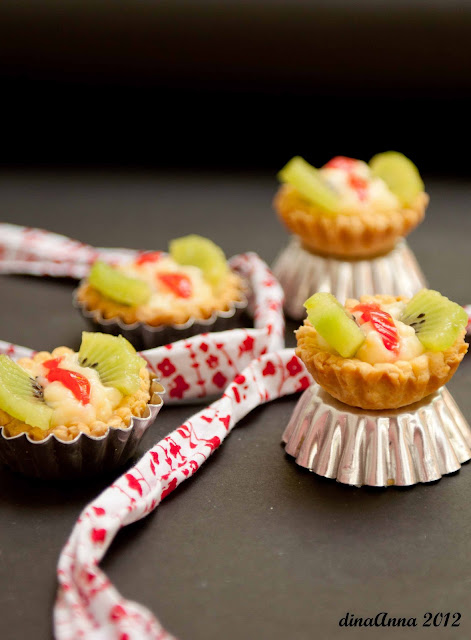 I really want to make a fruit pie for so long. So, yesterday I bought kiwi, strawberries, mandarins, and grapes for this 'project'. I put them in the fridge while I was doing my pie crust. I still used the same recipe as before. You could see it here. Finish kneading the crust, I put it beside the fruits in the fridge. Due to something else I had to go outside for a while.
Shortly after I back home I continued dealing with my pie dough. Rolled it, cut it and pressed it in my mini pie pans. Then prick the bottom of the pie with a fork. Done. Popped them in the oven.
Next, the custard...

In a saucepan, combine milk, sugar, and cornflour. Stir constantly until it just come to the boil. Off the stove.
Take a little bit of the mixture and pour in the egg yolk. Stir it quickly.
Pour it back to the mixture. On the stove again. Stir until it bubbling. Add the margarine and vanilla.  Stir constantly until it smooth. Remove from the heat, cover the saucepan with plastic wrap and let it cool.
Spoon it in the piping bag. 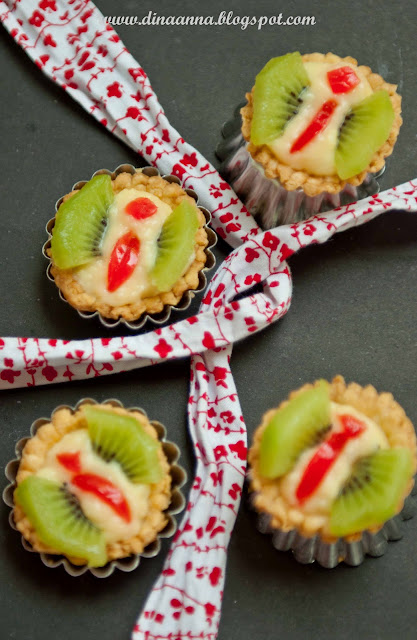 I transferred the pie crusts from the oven to a wire rack to cool. Oh God, they are beautifully flaky and golden brown. I think I am getting better and better in making pie crust...^^... Yaaay... Big smile spread on my face...
Then I went to the fridge to take the fruits. But, whatta??? Only kiwi were sitting there. Where are my Strawberries? And the grapes? And the mandarins? Oh dear, my little girl ate them all... What should I do? I tried to see other fruits in my fridge. Yes, there were pepaya and red cherries, also 2 bananas on the table. But they didn't work at all. 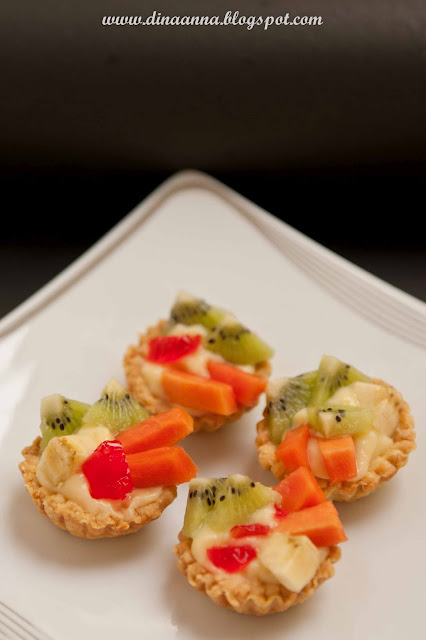 See... It's kinda funny to have them on a pie...
Then, I have another idea. Just pipe the custard on the pie crust. Slice the kiwi, put them on the left and the right side of the pie as the wings. Cut the red cherries in oval and small rectangles/circles shape. Put them in the middle of the pie as the body and the head. Fly high my butterfly... 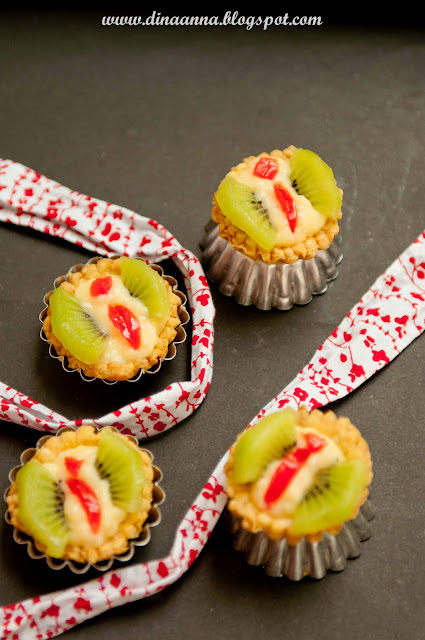 They are soooo beautiful, aren't they?

Email ThisBlogThis!Share to TwitterShare to FacebookShare to Pinterest
Label: Pastry

Another way to use leftover bananas... 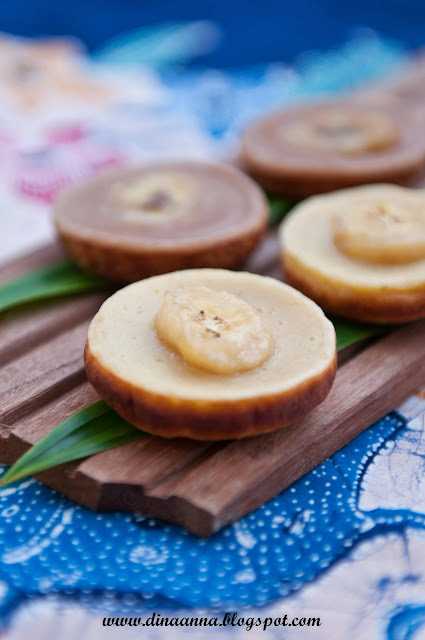 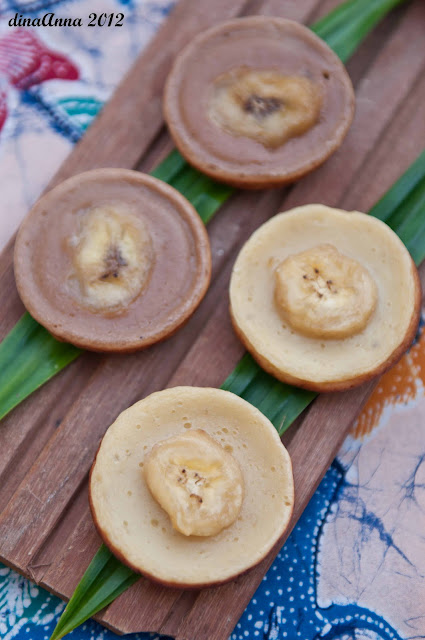 Methods:
Heat margarine and water until it start to boils.
Add the sugar. Stir until the sugar dissolve. Add the flour and salt. Mix well.
Add the potato. Mix well. Remove from the stove and let it cool.
Transfer to a bowl. Using a handmixer beat in baking powder, eggs, and bananas until all well  incorporated.
Gradually pour milk. Mix well.
Pour half the dough in another bowl. Dissolve cocoa powder
in about 2 tbs of hot water. Pour the cocoa in one of the dough. Mix well.
Heat the kue lumpur pan and grease each hole with margarine.
Spoon the batter into the heated pan and close the lid.
Cook over a low heat.
Add banana sliced when they are about half cooked. 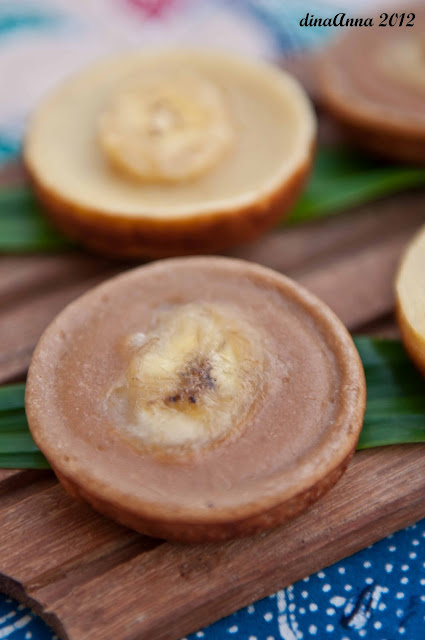 I think my fondness of making pie increase since I join the masak bareng yuuk event last month. It is really fun to make a pie. When moms in my neighbourhood had arisan in my home, I baked this flaky pie with peanut butter custard (vla) filling for them... 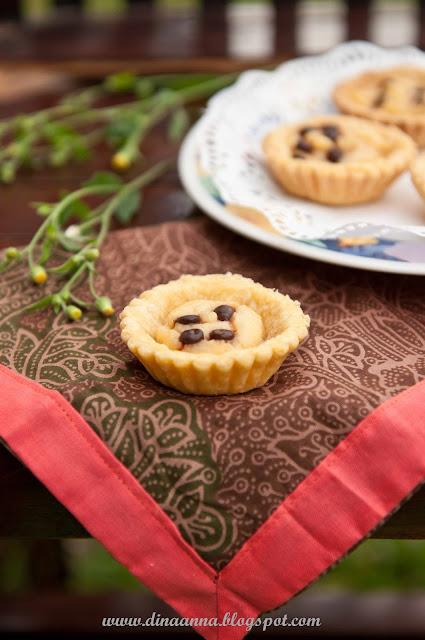 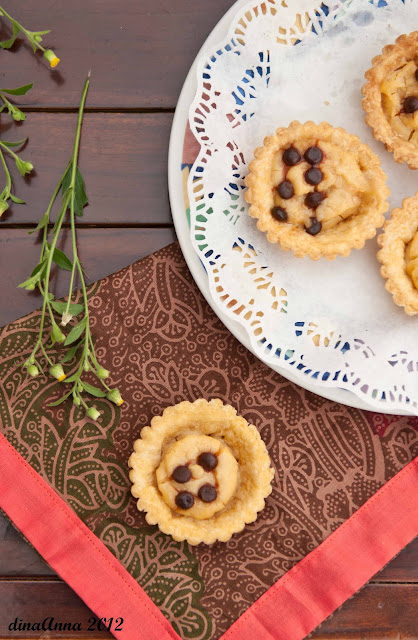 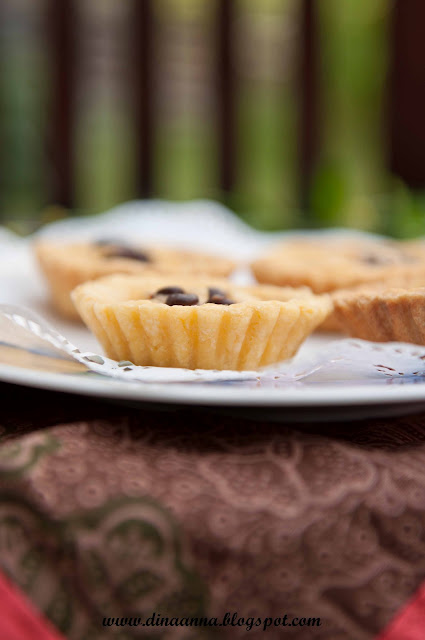 I don't know why I wake up in the middle of the last night. I didn't remember I got a bad dream or something. Everything was ok, my husband and children were sleeping soundly.
When I opened the fridge, I found a cup of steamed pumpkin. Aha, let's make something to kill the time. Hmmm, pumpkin yeast bread sounds good. I used the recipe for a banana yeast bread from tabloid saji and I substituted the bananas for pumpkin. 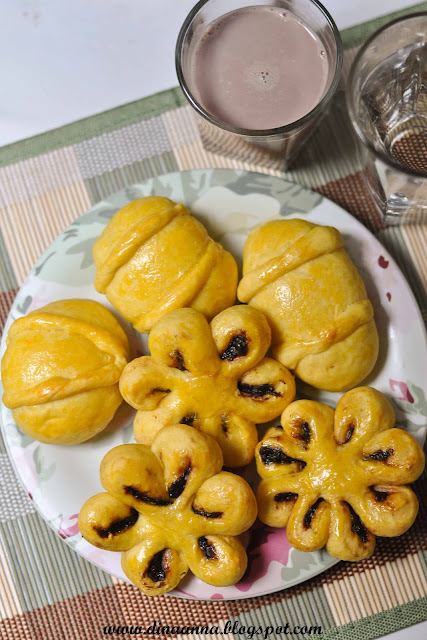 Cook all ingredients except egg yolk. Stir continuously until it thickens and bubbling. Turn off the stove. Add the yolk. Stir quickly. Turn on the stove again. Stir until it bubbling. Remove and let it cool. 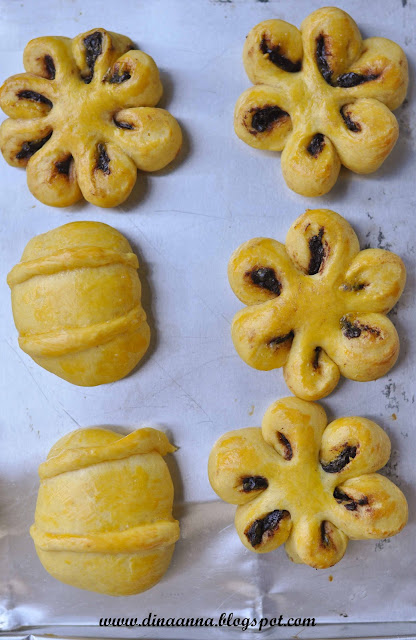