This kue ku was the result of googling after I tried the kue ku labu kuning early this month. I found that it was so difficult to release the kue ku from the mold although that I already pour (more than dust ^^) the mold with flour. I must miss something. Because if it is that hard, then no one will want to make and sell kue ku, right?
I added potato and coconut milk to the dough, but still, no change (Unless that it surely became softer and tastier than before). It was still uneasy to knock it out the mold. Then, I greased the mold with oil. Voila! It worked! The kue ku fell to my palm with only one knock...Yes!!!  oil is, then, the answer. 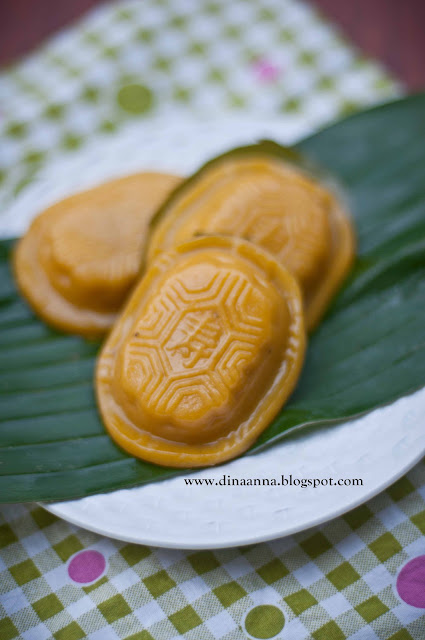 Combine mashed pumpkin, mashed potatoes, flour, sugar, and salt. Mix well until it forms a soft and pliable dough. Add more flour if it is too wet.
Divide the dough into 45 gr each. Roll the dough. Flatten it. Place the filling inside. Roll it again into a round ball.
Grease the kue ku mold with oil. Cut the banana leaves 10 X 8 cm. Grease them lightly with oil.
Place the ball in the mold. Press it gently and evenly.
To release the kue ku from the mold, turned the mold upside down and knocked the mold to your palm. Place the kue ku on banana leaves.
Steam for about 10 - 15 minutes. You need to open the lid of the steamer every 5 minutes so that the shape of the kue ku will not spread.
Enjoy!
Diposkan oleh Unknown di 13:31